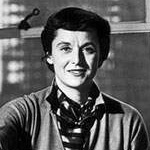 Florence Knoll Bassett was born May 24, 1917 in Saginaw, Michigan. She is both an accomplished architect and furniture designer. Her nickname"Shu"came from her maiden name"Schust".Knoll studied under Mies van der Rohe and Eliel Saarinen. She graduated from Kingswood School in 1934. She married Hans Knoll and in 1943 started working with him. Together they gave his furniture company a modernist, Scandinavian style. After Hans's death, Florence took over as head of Knoll. In 1958 she married Harry Hood Bassett.

A true minimalist, Knoll Bassett's furniture designs mixed woods, metals, and laminates to create clean lines and square shapes. As an architect, Knoll's most famous works are the Connecticut General Life Insurance building in Bloomfield, Connecticut and the interior of the CBS Building in New York City.

In the 1950’s Florence Knoll’s work could often be found displayed at the Museum of Modern Art. In the 1960s she designed corporate offices which were characteristically open, simple, clean floorplans without much fuss. She would often feature her own furniture designs in the offices she designed. Adopting this new vision were companies like H. J. Heinz, CBS, and Connecticut General Life Insurance. Florence Knoll Bassett retired from Knoll in 1965.