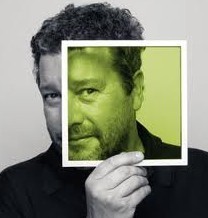 was born in paris in 1949. inspired by his father, who worked as an aircraft designer.
starck spent his childhood under his father's drawing boards, sawing, cutting, gluing, and sanding, dismantling bikes, motorcycles and other objects.
from the mid-sixties, starck attended the ecole nissim de camondo in paris, and he set up his first company in 1968 to produce inflatable objects. in the 1970s he fitted out the paris night-clubs la main bleue (1976) and les bains-douches (1978).
French president francois mitterand assigned him to decorate a suite in the elysée palace in paris in 1982.
since then he has reached a phenomenal international reputation in hotel interiors, furniture design and domestic products.
In 1984 he designed the interior of the café costes in paris, along with those of other establishments, such as the manin in tokyo (1985) and teatriz in madrid (1990).
He has also designed a number of private dwelling houses and apartment blocks, commercial premises. in paris a whole street block,
la rue starck, is going up to his designs (1991).
Pheilippe Starck may be the most famous and prolific designer alive.His desire for transgretion and challenge, of aesthetic and cultural
provocation made him change our lamps, door handles, cutlery, kettles, vases, clocks, scooters, motorcycles, desks, beds, taps,toothbrushes, baths, toilets… in short, our whole life.